Last Sunday was my first ever fun run and although I never understood why it was named ‘fun’ I discovered a euphoria and sense of achievement foreign to me.  Although I did the 100k ‘around the bay in a day’ cycling event once before, running has more of a sense of ‘togetherness’.

Our team page raised $2,450, and to add to that, individuals in the team raised over $1000 combined so that’s a huge effort. Thanks so much to those who donated. Without your donations I would not be on this clinical trail right now.

The doctor told me not to run until I am breathless, but it’s ok to run until I can’t talk. Well as if that would ever happen!!! I can always talk. I managed to run the whole 4k apart from the big hill on Anderson St (which I power walked) and I stopped for 2 drinks. My timing was 28.21 which I did without becoming breathless so I was very happy with that. An average of 7.1k per hour. Not my best but certainly not something to  complain about! 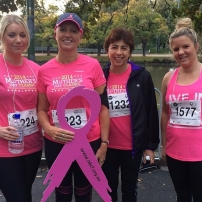 After the run with family

Being interviewed for stardom

The day began at 5.15 am (after going to bed at 11.45 pm the night before). Rosie, Sophie, Jess and I were driven to the city by the MOTH. The traffic was very quiet which was unexpected. We had agreed to jump out of the car close to St Kilda rd but on approaching Swanston St, the MOTH was deep into a long story. I interrupted him and asked if this is where we should jump out. ‘Yes’, he said ‘jump out here at the lights’. We were all taken by surprised and jumped out of the car and watched him sail into the distance. Ooh. It was cold and none of us had a jumper or jacket (apart from Rosie). Having been told not to get cold by my dr this was a vague worry for me. We were an HOUR early so we wandered around pretending to be warm and wondering how on Earth we would find the MOTH afterwards, given that we hadn’t arranged a meeting place and he doesn’t own a phone!!

So while we were waiting, an enterprising  journalist noticed my fantastic hair do (or lack of it) and asked if she could interview Sophie and I. We prattled on for 5 minutes, talking about how the money raised from the run contributes to cancer research. Given that I am on a clinical trail, this kind of treatment wouldn’t be available to me without the funding and this is why the race is so important.

I’m still not sure what the video was for but if anyone ever finds it please let me know. I want to get myself ready for the red carpet.

Sophie ran with me for the whole race. I can’t explain how lovely that felt. We both clocked in EXACTLY the same time to the second and it was such an emotional feeling running through the finish line with her by my side.

Most of the team caught up with us afterwards, including 2 of my lovely sisters and other family members. Some of the team ran or walked in other races. I’m so grateful to everyone who raised funds and contributed to the day.

I ate sugar and carbs all weekend to celebrate. My bad? After 3 months without it I was out of control.

So here is the question you’ve all been waiting for. Did we find the MOTH  (Man Of The House)?

Just like all moths, he is attracted to the flame. He is so worried that I will say ‘if you had a mobile phone this wouldn’t have happened’.

He spent time at the finish line. He watched Rosie, Janet, Jess my sisters etc all run past. He got a tear in his eye watching old women and pregnant mothers run past. BUT… he missed Sophie and I all together. How? We were running so fast we were just a flash, I explained.

He did manage to find us though which is always the way, lucky for him.

I’ve finished cycle 2 and they have stopped giving me cortisone altogether now as I have no nausea or allergic reactions. Woo hoo! I actually feel quite human today after having a sleep riddled with ‘night sweats’ but not the ‘wide awake’ night that I normally get from cortisone. I ran 3.5k on the treadmill to celebrate.

Now I have a one week break and then start my final 6 cycles (each cycle is a block of 4 weeks).

The good news is that the tumour appears to have vanished and at the next appointment in 2 weeks time they will discover that for themselves.

A happy dance is happening here:)