After picking our car up from the centre of London, we managed to drive the 5 hours to Marazion, in the far West of Cornwall. We soon discovered that the rumours of narrow roads in Cornwall were not exaggerated. The road to Marazion is one car width with stone walls either side (right up against the road) but with traffic often coming from the opposite direction. It is an art form, trying to reverse or pull into a spot to let traffic through and sometimes hair raising. Still, driving through this and the centre of london is NOTHING compared to driving in Nice, Marseille and Lyon in France. 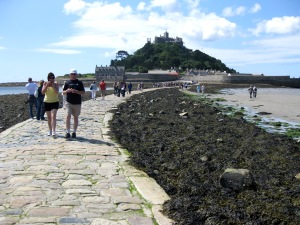 Tide is out at Mont St Michael

Marazion is just gorgeous and has a little island, ‘St Michaels Mont’ with a castle on it… all within walking distance. There is a cobblestoned path to the island, which is covered by sea for most of the day but when the tide is out there is a constant stream of tourists going to see the castle and gardens on the island.

We are very close to Penzance, Newlyn and Mousehole (pron: Mouzel). Mousehole is our favorite so far but all of Cornwall is filled with charm and character.

The Cornish have had the ability to put letters together to create words which are impossible to pronounce! Some of them are just plain funny (Skillywaddins cottage?). I resisted purchasing a packet of ‘Pisky poo’ (chocolate covered raisins) in the local shop. Colin has taken to ‘having a yarn’ to the locals, who are very friendly and amuse us with their accents.

Our visit to Newlyn was filled with anticipation of seeing the beach where my great grandmother posed for a painting. Strangely enough, an unexpected thing happened (ooh ahhh!). One of my dreams in life, has been to come to 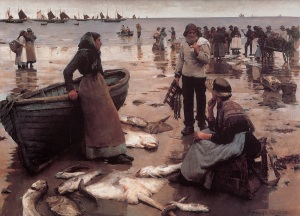 A fish sale on a Cornish beach (Newlyn)

Cornwall to see the painting of my Great Gran, by Stanhope Forbes, the most famous of the Newlyn painters. So this was my Number 1 goal for coming to Cornwall and since it is held at the Plymouth museum, I booked accommodation in Plymouth and was all prepared to go see it there at the end of our trip. HOWEVER….we spent a day in Penzance, 2 miles away, and ‘wandered’ into an Art gallery. Lo and behold, the painting was ‘on loan’ to the gallery in Penzance and on their advertising fliers and posters!! I couldn’t believe it. I had no idea it was so huge or so magnificent.  The painting is far more exquisite than the copies and pics I have seen. They would NOT let me take a photo of it: (   Some might find it hard to believe, (said with a hint of sarcasm) but I argued with them about it. After all,  it is ok to take photos in the Louvre and I have one of myself with the Mona Lisa, taken without a flash, (!!!)… but they wouldn’t budge on their rules. It is copywrite, they said. I wonder who owns the copywrite???? Anyhow, no sense in dwelling on it. I bought lots of cards, posters, postcards and books with the painting on it and also found some interesting information about the painter. That was soooo exciting. The art work was incredible.  Much more ‘down to earth’ than the art we have seen in Italy and France.

Another highlight, was going to the Minack Theatre. It is an open air theatre which was single handedly carved by a woman down a cliff face, looking over the bay. The stage sits about 700 metres above the sea with a sheer drop over the side.

The Minack Theatre is the most famous cliff theatre in Britain, possibly in the world, carved into the granite cliff overlooking the spectacular panorama of Porthcurno bay.

We pre-booked our tickets before we left Melbourne to see ‘The happiest days of your life’ (aptly named?), which is a British comedy. The performance was wonderful but the atmosphere was something I will never forget.