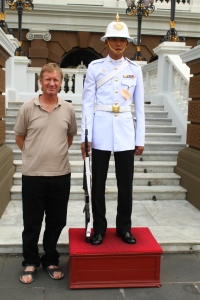 Colin at the Grand Palace in his new pants.

Today’s funny was brought to you by a crazy taxi ride and a pair of  ‘genuine fake Levis’.
In an effort to HURRY to meet the others at the Oriental hotel for ‘High Tea’ Colin and I ran down to the market to buy him some long pants, since his were left with our other luggage at Tha Phon and he had to wear them in the hotel. We found some ‘genuine fake’ Levis and ran back to our motel room where he put them on, only to find they had a button up fly and the button holes were WAY too small. The rest of our group had already gone so we both tried desperately to do the buttons up in a hurry. In the end, I had to ‘saw’ them with a small nail file on our nail clippers (while he was wearing them). We both got the giggles and luckily I didn’t slip with the nail file!!
After jumping into a taxi, the driver threw us out 10 minutes later. The 2nd taxi driver tried to con us into more money all the way and then Mel rang and said they weren’t having High tea after all… so we diverted the taxi driver to the Grand Palace and spent 3 hours there instead.
So much for the new long pants!!