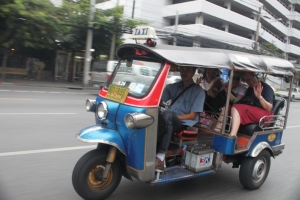 Our first day in Bangkok we were pretty weary. We met up with Eiam and Peter at our hotel for breakfast and enjoyed scrambled eggs and toast with a stiff brew of coffee. After much discussion, we decided to take a taxi to the markets where (wait for it) Colin was measured up for a suit for the wedding. He (we) chose a nice cashmere fabric and shirt which we will pick up when we arrive back in Bangkok in a few weeks time.

I had the choice of shopping with Lee, Lorraine and Eiam or going to the computer shop. Hard choice… but the computer shop won. I was so overshelmed by the centre I bought nothing! After lunch, we returned to our rooms on a ‘Tok Tok’ which is similar to an amusement ride at Luna Park. For just a few small dollars we were able to spin through the polluted traffic with the greatest of ease.

After freshening up at the room, which took quite a bit of effort as we had to be careful what we wore, we took a more civilised taxi accross to the Oriental hotel. The code of dress here was complex as we had already sent most of our luggage away to Tha Phon, where Peter and Eiam live. My taxi had Peter, Bruce and Lorraine and myself in it. We arrived to the beautiful hotel, managed to pass the scrutiny of the doorman and sat looking at the exquisite cakes and decor while we waited for the other group. After over an hour of this, the other group ‘spilled into the room with stories of getting lost and having to walk for several 100 kilometres.

It was then discovered that high tea (which is what we came for) was now over. We decided to catch a water taxi along the river. At this stage I discovered I had no SD card in my camera so had to resort to photographing with the ‘Hipstamatic’ app on my iphone.

Our next stop was home again and the groups in the taxis were the same as before. My group won the Amazing race yet again and arrived considerably earlier than the less skilled one.

The most difficult part of that day was having our ‘foot massage’ (calves and thighs with added shoulders and kneck) for an hour. Apart from the sound of Colin squeeling everytime they hit a sore spot in his feet, the experience was more than pleasant!!

The day finished off at a restaurant, where we dined outside in the cool air sipping Thai beer.

I don’t recall going to sleep or being asleep but I’m sure I did!