Once, there was a black cardigan. It had travelled Europe, Egypt and much of Melbourne. It reached New Zealand with trepidation. Would it live up to expectations and be warm and fashionable in a spectacular country such as this? 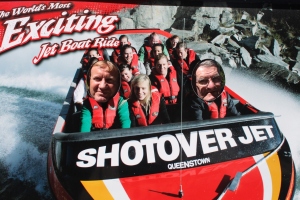 Today, it was warm and sunny, but it accompanied Jenny on her journey with Colin and Doug, toArrowtown where it saw a Chinese village and a quaint township from it’s view slung over Jenny’s bag. After experiencing stunning views and witnessing shocking ‘Shotover’ jetboats’ zooming through a canyon… it continued on to Glenorchy. 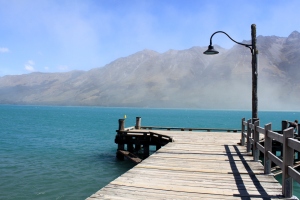 It was stunned to see the view along the windy roads on the way. When it reached the township, it found a long wooden pier which ended along the steamy lake, surrounded by huge snow capped mountains. The wind was blowing so hard that people could barely walk and the cardigan met it’s fate (drum roll here).

Whilst Jenny was being careless and taking photos, the Weary Black Cardigan flew in the air and landed with a plop in the lake. The three people looked with dispair but no-one, including Colin, was prepared to swim out to retrieve it. It floated elegantly on the surface until it was out of sight. Last seen, heading to a new owner in a far away land.

More pics from today on this link…