We arrived at Siena via bus with our 50 k of luggage and discovered that our accomodation was in the old part (as in the pic to the left) where transport is not allowed. We walked 4k up and down cobblestoned hills and 6 or 7 flights of stairs with our luggage (because we were lost!!!) and then got told our B&B was back where we started and not at the address we were given. Oh BOY! My arms were aching by then! 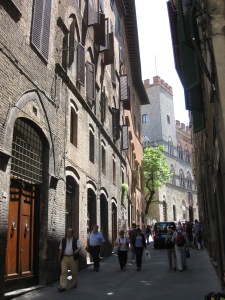 I can’t even describe Siena. It is by far the most beautiful place I have ever been to. So awesome I am lost for words… and THAT is really saying something!!

We were only in Siena for one night and caught the bus to Florence the next morning but managed to c over the sights in Siena and finished it off with wine and risotto outside looking over the ‘James bond racing arena’. Ahhh!

We visited the Museo Dell ‘Opera, Battusteri, Cripta and Duomo (which is the most garished building I have ever seen!!).

At the Duomo (which we climbed… of course!!) we met a little old man from Birmingham, UK who picked our accents. I took this pic of him, Col and an Italian man on a seat…