Arrived home from driving myself home from Halls Gap and filming in The Grampians with Elindil’s Secret movie crew. It was CHAOS at home due to the fact that we are re-carpeting today and so the whole house is in turmoil. My undies are in the drawer on the front veranda, my shoes under the pergola and my clothes are in a big pile in the family room somewhere. Col said ‘just wear whats on top of the pile to work’……. which happened to be a summer dress!!

I was exhausted from going out Friday night for Sophies 19th birthday, getting up at 4am to drive to Halls gap Saturday, filming all day up in the mountains at The Grampians and driving back again yesterday. Then I had to help move furniture and make head or tail of the mess at home. Sophie was moaning that she had homework to do and the computer was off line. The costumes are still in my car (smelly smelly things they are too)

RE-CAP of the filming weekend:

The cast and crew met at Arrarat Mc Donalds early Saturday , morning for breakie and then continued on up to the Mt Zero carpark (collecting the Strempels on the way) to do make-up and wardrobe in the posh carpark setting. It was much much milder there than last time we went to The Grampians ( it was absolutely freezing) but I decided it would still be chilly up the mountain so I climbed Hollow mountain in my thermals and other layers which I progressively removed like an autumn tree all the way up. Once I reached the top I had to find a change room (a rock) to remove my thermals!!! Luckily I managed to do that without horrifying a member of the public. It was gorgeous up there (view and temperature) and some of us managed to catch 10 mins laying in the sun on a rock. What an awesome spot. At one point we had scones with jam and cream (thanks to Andrea!!) which was highly civilised for a bunch of film crew on a mountain.

Mark took over the job of making a ‘crash dummy’ (with one of my costumes!!!). It was a pretty odd looking specimen indeed. We named him Bucket Jones (or bucket head) as he had a bucket for a head. Poor Mark had to lug him up the mountain. We soon realised that Bucket Jones wasn’t going to be too convincing on film since his head came off and he displayed various other odd contortions on his way over the cliff. It was pretty funny anyhow so he made the grade as unpaid entertainment for us.

Our other hiccup was the random hikers who kept ‘appearing’ in frame while we were filming. We would then stop filming and wait for them but often they would want to ‘chat’ while they were there. Meanwhile that perfect cloud cover was disappearing!!

The fight scene was awesome and the guys were very realistic. Well done Dave and Luke!!! Especially realistic was Luke who nearly went over the cliff several times.

By the time we got to climb the second mountain my legs were getting pretty tired. The final film scene caused a bit of a spectacle with hikers but ended beautifully with an awesome sunset, complete with God rays. It was a fantastic end to a great day of filming.

You can read another account of the weekend on maxfactormama’s blog.

I just wish my hamstrings weren’t hurting so much so I could prepare for moving furniture again tonight…… and my next game of footy:) 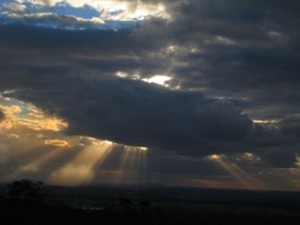