17/9/10
I discovered an odd assortment of exposed wiring into an electrical socket behind my bed head at our hotel at Nong Kai. I managed to keep my pillow in place overnight and avoid getting electricuted!
After packing up, we drove to immigration and attempted to convince them to extend our Visa by 2 days. The sign out the front said, ‘Come and see our happy smiles’. We didn’t see any smiles at all. The woman at the desk told us that we could not extend our Visa but to overstay it and pay a penalty at the airport (2 days late). This would amount to 1000 Baht each (about $30). 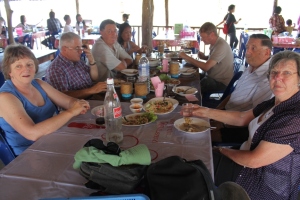 Lunch was at Our next task was to find a silk making place in Chonnabot. After much driving, many U turns, asking locals where to go and and discussion about directions we discovered that the factory was closed on that day. We proceeded to find some silk shops to satisfy ourselves. One of the locals who gave us directions, offered to take us to a house where a woman weaves silk. We walked down the back of the village into the bottom of a house, which was on stilts) and watched a woman weaving on the dirt floor with dogs and chooks running around under her feet. She was paid 100 Baht a day (about$3). It was an amazing experience to watch her skill and the conditions in which she worked. Afterwards we went to some silk shops in the street. these were quite expensive but one of them offered to show us out the back where they weave the silk. The conditions here were pretty much the same, only it wasn’t underneath somebodies house!
Our journey ended at Phi Mai, where we found the only hotel in the village and paid $14Aus for the night.
Eiam took us to the night market where we inspected the incredible food produce. Fried crickets, 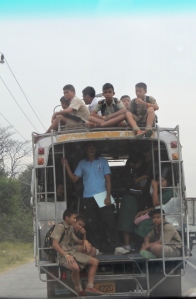 fried silk worm, fish heads and things I cannot describe! Colin, Lorraine, Mal and I all tried a silk worm dipped in soy sauce but passed on the crickets and things which I have no way of identifying. As usual, we were the only ‘Felang’ in sight.
Tea was an entertaining experience with the worker in the restaurant being quite reluctant to serve us. We ate and drank beer, soft drink and food for the evening for the costly sum of 600 Baht ($19) for all 8 of us.
So far we have not had a single meal which wasn’t delicious… and most of them have been in the local villages where the locals eat.