Our time in Venice was enhanced by staying with my Twitter friend @monicacassaro who owns a B&B there. Monica and Chris made us very welcome and gave us the ‘home away from home’ treatment which was really appreciated. The B &B is not on the island part so we had to walk and catch a bus each morning which gave us the opportunity to experience real Italy, including a kind man who was pruning a plum tree and threw some to us. Or perhaps he was throwing them at us?
We spent our two days walking the islands and hopping on and off the water buses from island to island, choosing not to have a gondola ride and save ourselves the $$. The weather was HOT and in the 30s so the days were long and tiring.
Our trip to Rome was on a 40 degree day and a. 10.5 hour journey which felt more like a rest for us weary travellers. We arrived at our ‘ hotel’ to find varying degrees of European hotel discomfort. The rooms are less than 3 meters long not as wide and HOT so we chose to pay the extra for air con except that my air con doesnt work and Sophie’s does. The rooms are also extremely noisy but earplugs muffle it nicely. Trip advisor will have a nice long spiel for this one. Not that we are princesses at all but this one is beyond a joke and we are here for 5 days. It’s the first ‘ separate rooms’ we have had for weeks so it feels quite odd. Nobody from Melbourne cares about our hot rooms of course, since they are all suffering in the cold at home, but I’m playing my own violin here!
The next 2 days were 38+C and we had ‘ hip on hop off bus’ tickets for 2 days so there we were on the top of the open buses in the direct sun and heat getting sizzled. This morning Sophie had a tumble down the stairs and bruised herself badly and we are both sunburnt but all the same we are having an AWESOME time and really loving Rome. When I was in Rome in 2009 I had jetlag and I think I didn’t appreciate it very well.
We are eating so much gelato its become the new vegetable replacement. Who needs veges?
Tomorrow we are off to Pompeii and Naples for a day trip so it’s an early night for us! 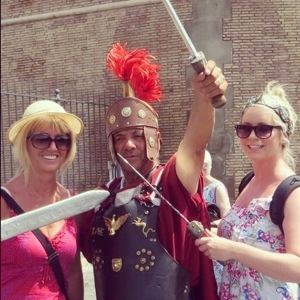 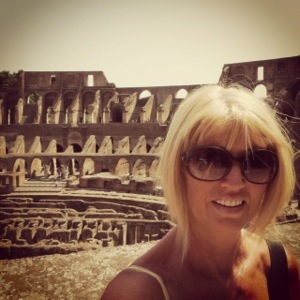