Arggh! We have another dent in the hire car and two scratches. It’s a Brand new Honda which now has a broken side mirror (from being side swiped by a speeding car going in the opposite direction) and a dent and scratch from sitting in a car park at our hotel last night. Oh and don’t forget about the flat battery we had on day one too! Now you might think we are accident prone, but if you don’t take risks you don’t have accidents. We could have taken an organised tour or used public transport like most normal people, but you don’t get to do the amazing things we are doing and drive where angels fear to tread. Driving a manual car on the other side of the road with this kind of traffic and narrow pathways is a challenge but so far our accidents have been ‘the other person’. Well there is 3 weeks to go so let’s hope that’s it!! 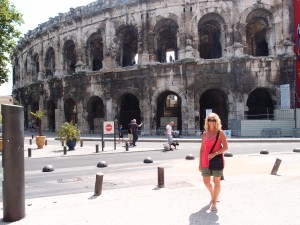 Today we went to Nimes and looked over the Roman arena, which is the most intact Roman arena in the world. It’s smaller than the coloseum but certainly more impressive considering it is only 20 younger and still used for Bull fighting.

After spending 4 or 5 hours at Nimes walking and climbing stairs in the hot hot sun, we drove off to Avignon.

A busker in the street of Avignon

Here is a big tip… if you are going to biggish cities in France, go on a SUNDAY because the shops are all shut and there are lots of parks and no traffic. The exception was Avignon today. They had a parade and festival of dramatic arts. There were 1000’s of peopl, buskers and theatre groups. It was a combination of odd, exciting and vibrant. We were so fascinated that we didn’t leave until 6pm. Hot and weary.

When we arrived back at the Hotel there were a couple of Aussies there from Wangaratta!! These were the first we have seen for 3 weeks so we sat up and had a chat with them until late.

I’ll leave you with a childhood French song I leaned when I was very young about the Avignon bridge:

What's left of the Avignon bridge